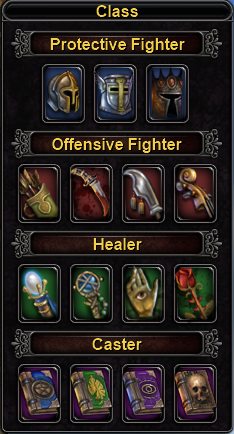 The warrior is a combatant of brute force, using his strength of arm and will in the defense of his allies. A seasoned veteran of many conflicts, he is an able battlefield tactician with the further ability to inspire and direct his allies toward victory. The most militant of the protective fighters, warriors are able to choose between wielding two weapons and cleaving through foes with a two-handed weapon. Warriors protect themselves with heavy armor and shields.

Paladins are virtuous defenders of the weak and vengeful punishers of the wicked. Paladins are able to cast divine spells to bolster themselves and their allies, heal and even raise fallen comrades from the dead. They are also granted Gifts of Virtue, which enable them to call the very power of the gods to their aid. Paladins wear heavy armors and can wield most weapons. Born protectors, paladins use heavy armors, shields and two-handed weapons as they battle the forces of evil and become even more powerful when fighting undead foes.

A horrific opponent, the dread knight is surrounded by a palpable pall of fear and despair that causes nearby opponents to become more vulnerable to attack. Adept at manipulating dark magic, the dread knight can augment his offensive and defensive capabilities, weaken or panic foes and even kill his opponent with a single word. Dread knights wear heavy armor, use shields and favor the destructive power of two-handed weapons over all else.

Bards are naturally gifted in the harmonizing of song and swordplay in a deadly dance that is at once awesome and terrible to behold. Bards can use their unique combat forms to gain increasing power as a fight progresses. They also have the ability to compose songs using bits of lore and tunes heard throughout their journeys. As a Bard advances, the songs he can create grow in complexity and power. Bards have the opportunity to seek out those rare stories and melodies that will add even more power to their compositions. Bards are deadly offensive fighters who wield slashing and piercing weapons and wear medium armor.

Rogues are deadly melee combatants who rely on deception and misdirection. With the ability to hide in plain sight, the rogue is able to sneak up on unsuspecting opponents, poison them and then launch a devastating surprise attack. A rogue is also talented in the use of a variety of poisons and gadgets. The various components for these items don't come cheap, which is why the rogue is also an expert thief. The rogue wields a variety of light and ranged weapons and wears medium armor.

The ranger's awesome displays of combat prowess are a wonder to behold and a nightmare to face. Unique fighting styles allow the ranger to be able to fight defensively or offensively and to improve his tactics by adapting his combat style in reaction to his opponent's powers. Rangers also have some command over nature itself, using it to heal and augment, as well as channeling it into special attacks. The Ranger is also a very skilled archer, having many special skills when using a bow in combat. The Ranger wears medium armor and prefers wielding double one-handed weapons.

Fast and deadly, the Monk strives to achieve physical perfection. Monks can harness Jin, an internal power source, to achieve extraordinary feats in and out of combat. Monks are able to join one of three martial schools, each with its own unique abilities. Choose the raw power of dragon mastery, frustrate opponents as a drunken master or choose the subtle and deceptive power of harmonious body mastery. Monks wear medium armor and prefer martial style weapons, including martial swords, staves and hand to hand weapons.

The Cleric uses the power of divinity to benefit his fellow adventurers and wreak havoc on his opponents. His abilities include powerful heals and spells that augment and protect. Clerics are also the bane of unlife, gaining incredible power when fighting undead opponents. Clerics prefer to wade into battle alongside their martial allies using powerful melee attacks to smash their opponents while augmenting their group. Clerics wear heavy armor and prefer crushing weapons of all varieties.

Mastery over blood allows the Blood Mage total control over the entire spectrum of mortality, birth unto death. Blood Mages can drain an opponent of life and transfer it to an ally, or even share some of his own. Healing comes naturally to the Blood Mage, as does destruction. With his ability to explode an opponent's organs, bring their blood to boil and heal an ally by draining their life essence, the Blood Mage makes a valuable friend and a formidable foe.

Shamans gain their powers through communion with the spirits of Telon. They are able to utilize the powers of their ancestors in order to perform great feats of healing and protection. They can also form bonds with powerful animalistic spirits in order to gain access to powerful spells, animal servants and even the ability to transform into a raging bear, a cunning wolf or brilliant phoenix. Shaman wear medium armor and prefer spears and crushing weapons.

Disciples are gifted healers as well as potent martial combatants and are able to blend the two seamlessly. They are master manipulators of the internal force known as Jin. Using Jin they are able to perform supernatural feats that can harm their opponents or bolster their allies. Disciples are also excellent at avoiding damage and quickly counter attacking those who are foolish enough to assault them. They wear medium armor and prefer martial style weapons, including martial swords, staves and hand to hand weapons.

The psionicist is the master of the psionic energies. His abilities grant him the power to blast his foes with mental blasts, create destructive spells that decimate all within a large area, bend time to trap an opponent, and even take control of his foe entirely. The psionicist uses his powers to destroy the enemy ranks and to protect and augment his allies. The psionicist is a poor melee combatant, but his vast mental powers more than make up for it.

Masters of unlife after death, Necromancers have the power to perform such feats as raise undead minions from the remains of fallen opponents, hurl spears of bone at enemies, or cause the corpse of a dead enemy to explode with devastating force. Necromancers can also summon a powerful abomination that will act as a constant companion to their masters. Abominations can equip items, gain levels and grow in power and size as their master gains increasing power. Instead of flashy direct damage spells, Necromancers prefer the slow death of decay and disease or sucking the life from their foes. The Necromancer has limited access to armor and weapons and has very little martial skill.

Master of the arcane, manipulator of ice and fire, the sorcerer is known by many names. Sorcerers have the ability to channel the various energies into themselves and then reform this energy to fuel powerful magics. Destruction is the primary job of the Sorcerer, bending fire, frost and mystical energies into powerful damaging spells. They also have formidable defenses against other spell casters. Sorcerers are very poor melee combatants who prefer to launch their spells from behind the front line of combat.

Druids are powerful spell casters who harness the power of nature to break their enemies and bolster their allies. Druids are able to call down very powerful destruction spells called Calamities and can also produce awesome beneficial effects through the use of abilities called Wonders. Druids are able to use their impressive powers to call elementals from the earth and lightning from the sky. The Druid has little skill with martial attacks, but one who calls stone and storm their friend has little need for such base abilities.

This category currently contains no pages or media.