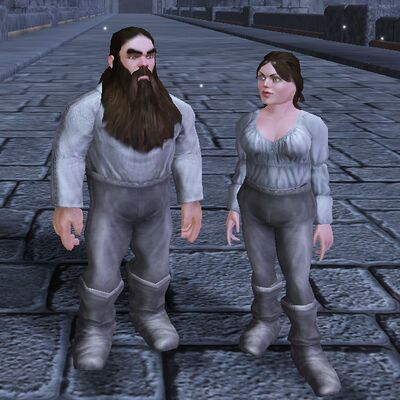 Master craftsmen and fierce warriors the dwarves of Thestra live in the underground city of Bordinar's Cleft, deep in the Widows Veil Mountains. They currently stand at the front line of the undead invasion, with the humans, halflings and vulmane already having been forced to move elsewhere and it is a task they readily accept. Their home, much like themselves is sturdy and built to last. The sounds of dwarves busily forging armor and weapons with a skill and discipline that is unrivaled on Thestra can constantly be heard echoing through the grand halls of their city.

While often viewed as grumpy and dour by other races the dwarves actually have a very good sense of humor and once befriended, an unwavering sense of loyalty. They are much stronger than their size would imply and tend to lean towards more physical professions

From Vanguard Saga of Heroes, a Wikia wiki.
Retrieved from "http://vgoplayers.com/wiki/index.php?title=Dwarf&oldid=1761"