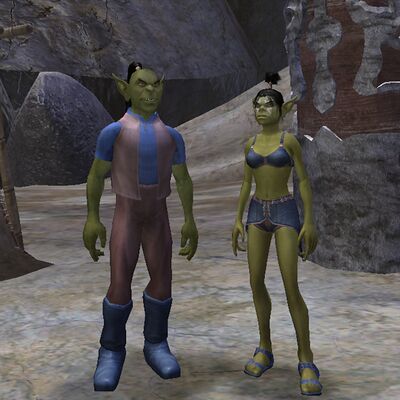 Sinister and devious, the goblins of the Kojan Archipelago are practitioners of magic without equal. Along with their orc clansmen, the magically adept goblins pose a very dangerous threat to the rest of Telon, a threat that is tempered only by the warfare between their clans. While goblins possess a potent link to the spiritual ancestors of their kind, it is in their ability to master any arcane art they lay hands on that the goblins display true power. No arcane secret remains so for long once it is in the hands of a goblin.

The city of Martok is home to many goblins, along with their orc clansmen. As a clan they have blended together to not only survive, but form an army of such brutal efficiency, drive, and capability that none can stand before them. The goblins tend to enjoy gathering trinkets and discarded treasures from the orcs, and each other, with a curious drive to figure everything out.

While viewed by other races as vicious, evil, and disgusting beings, the goblins are anything but. While they do indeed utilize any advantage they can against a foe in combat, they are a respected and respectful people to their friends and allies, the orcs.

Playable Goblins hail from the city of Martok, along with the Orcs. Their standing in this society is mainly as magical aids to the Orcs, and providing spiritual advice with their Shamans.

Allies & Enemies The denizens of Martok are at war with the Gulgrethor.

From Vanguard Saga of Heroes, a Wikia wiki.
Retrieved from "http://vgoplayers.com/wiki/index.php?title=Goblin&oldid=1771"