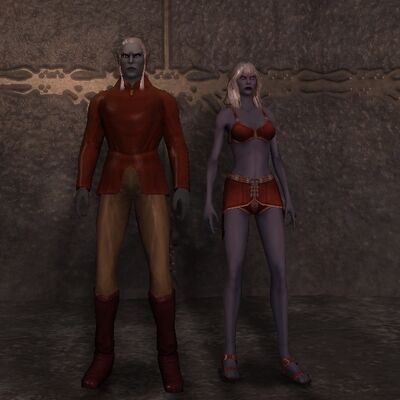 Destined to rule the world and enslave all others beneath them, the Dark Elves must hurdle one last obstacle, themselves. As a people, the Dark Elves are driven by one desire, the accumulation of power that is rightly theirs by blood, the blood of dragons.

One of the oldest races on Telon, the Dark Elves fled from their volcanic home of Stiirhad with their queen to establish a new empire at Pankor Zhi. They are now regrouping and preparing to destroy the mad king of Stiirhad and retake the true throne of the Dark Elves. First they must deal with the waifish elven rebels of Aeokor Zhi.

Distrusted by all the races on Qalia, the Dark Elves have few others to turn to for they refuse to ally with those beneath them. Only the Varanthari horse people, masters of the northern plains, are afforded an inkling of respect. For now.

Dark Elven society values the purity of the Haelifur's blood in one's veins more than anything else. There are only very rough ways to test this purity, so traits such as ruthlessness, cunning, and brutality act as its primary indicators. The Dark Elves revere dragons as the children of Haelifur, and both tend to their eggs and fight alongside them in battle. The queen's power is absolute, and she commands a group of specially trained operatives known as the Wing Watchers who are above the law, and above the rules and regulations which govern the legionnaires.

The Dark Elves have no true allies, though they tolerate cooperation with the northern Varanthari of Lomshir at times. Most of the free peoples of the world see the Dark Elves collectively as a threat, but few would willingly count themselves among their enemies.

From Vanguard Saga of Heroes, a Wikia wiki.
Retrieved from "http://vgoplayers.com/wiki/index.php?title=Dark_Elf&oldid=11670"