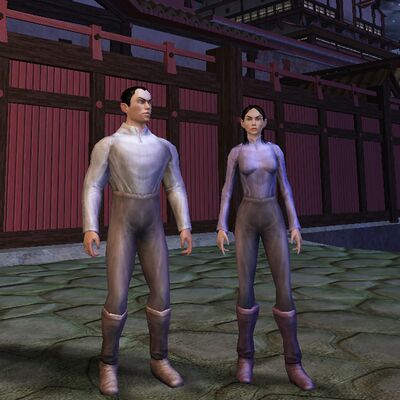 Born of the union between wood elves and the kojani humans, half-elves find themselves walking along the outskirts of both societies. The rigid world of the kojani and the results-oriented ways of the wood elves tend to reject these generalists. By making their way in the world, a half-elf feels at home in any place and within almost any culture. Half-elves can be noble warriors or despicable black-marketers - and any shade in between - without other half-elves so much as raising an eyebrow.

Due to their cultural mutability, half elves form loose communities that sometimes resemble gangs from the outside. This is often a misnomer, as the half elves within this group are no more anti-social than the average Kojani or wood elf. By forming these groups, the half elves give themselves an identity they would otherwise lack.

Stronger than their elven parents, wiser and more in tune with nature than their human parents, the half elf has many of the best features of both races.

From Vanguard Saga of Heroes, a Wikia wiki.
Retrieved from "http://vgoplayers.com/wiki/index.php?title=Half_Elf&oldid=1769"