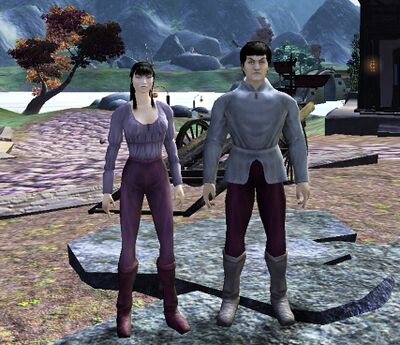 Humans came to the Kojani Archipelago to make it a part of a large sea empire. A culture of unity and devotion to family, Emperor, and Empire, the kojani have created a unique environment for themselves on Kojan. Deeply spiritual and introspective, the kojani draw deeply from the life-force known as Jin. A kojani warrior is rarely simply a master of weaponry, but knows something of history, magic, and poetry as well. Governed by an Emperor and his ten Magistrates, the kojani people pay deference to their social betters, and show respect to those lower than themselves. Nearly all kojani follow the Way of Harmony, a way of life that emphasizes working toward the greater good of their society and Jin.

Their home, Tanvu, is a large fishing village beside a deep, protected bay. Surrounded by pillars crackling with magical energy, Tanvu and the kojani find themselves under constant siege by the otherworldly ulvari and their ravenous allies.

Taciturn, inscrutable, and honest, the kojani find themselves trusted and respected by other races, but rarely loved.

From Vanguard Saga of Heroes, a Wikia wiki.
Retrieved from "http://vgoplayers.com/wiki/index.php?title=Kojani_Human&oldid=1380"