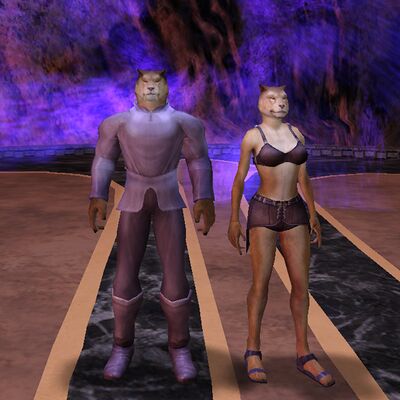 Other worldly trackers and fierce hunters, the Kurashasa are among the most feared beings in the outer planes. Their Great Hunt of the rift walking Ahnd'ka has led them to the world of Qur'xa and its temple of twisting gates. A sneak attack upon the Temple of Qur'xa by the last vestiges of the Ahnd'ka has caught the proud Kurashasa by surprise, and now the savage world of Qur'xa has been transformed into a battlefield. The psychic Yothkai, allies of the Kurashasa and keepers of the temple, have been forced to abandon the temple to their mutual enemy. Should the Ahnd'ka unravel the wards on the twisting gates and cross the planes then the Great Hunt must follow. Cunning, powerful and intelligent, the Kurashasa are feared by their enemies and allies alike.

Kurashasan society is governed by an oligarchical council of psionicists who coordinate the Great Hunt. Their society revolves heavily around the Great Hunt, and all Kurashasa take part in it in some way, whether they participate in battles, craft arms and armor for Kurashasa warriors, or act as emissaries to allies and new worlds. Many Kurashasa are born with psionic talents, and these hold a special place in Kurashasa society as scholars, historians, and diplomats more often than as warriors. The Kurashasa are known everywhere they go for their cunning, and their skill as warriors.

For longer than their historians can remember, the Kurashasa have devoted themselves to the Great Hunt, a war on a race of plane-travelling draconian creatures called the And'kha. For just as long, mature Kurashasa who are to engage in the Great Hunt engage in a symbiotic partnership with a member of the Yothkai species. This bond grants them increased strength, reflexes, and hardens their minds against the strain of inter-planar travel. The bond also allows Kurashasa granted special symbiotes to communicate psionically across the planes, thus coordinating the Great Hunt. Currently, having tracked the last of the And'kha to the world of Telon, the Kurashasa are hunting them there, and have enlisted the help of several other races (Sybarites, Pyrelords, Nith, Umbrals, and Shapers of Zhaal) in ensuring that this final world will be the culmination of their hunt. This assault is being lead from the Temple of Twisting Gates on the world of Qur'Xa, which holds one of only two known gates to Telon, the other being under the control of the Pyrelords.

The Kurashasa have formed a loose coalition with the following extra-planar races:

The Kurashasa have also established contact and are attempting to establish an alliance with the various races of Qalia in order to ensure the And'kha have nowhere to hide. They have especially good relations with the Varanthari, who are a fellow warrior-people, and with whom they first made contact on Telon. The Varanthari currently share their town of Lomshir with the Kurashasa. The Kurashasa have no enemies as of yet on Telon, but the Qaliathari, Mordebi, and Dark Elves still distrust them.

From Vanguard Saga of Heroes, a Wikia wiki.
Retrieved from "http://vgoplayers.com/wiki/index.php?title=Kurashasa&oldid=1775"