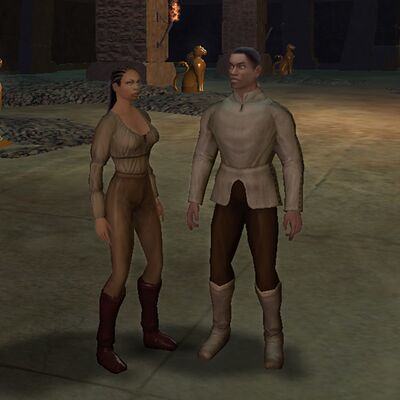 No strangers to hardship, the Mordebi humans of the Qalian deserts have seen the destruction of their great society not once, but twice. Refusing to anger the gods again, they have learned their lessons from the desert itself. They see now where their true destiny lies. Swift as the wind and as dangerous as a sandstorm, the Mordebi find their strength now in adaptability and nomadic ways. They look to the sands of Qalia to find their home and have shown time and time again, they cannot be truly destroyed, they will always return. The Mordebi find themselves allying with the Varanthari, horse-riding barbarians, more often as their views align easily. However, they are not above taking advantage of the overly rich and corrupt Qaliathari humans.

The Lost Tehatamani Empire was ruled by the ancestors of the modern Mordebi, and the dreaded Tomb Lords of Nusibe were Mordebi as well.

From Vanguard Saga of Heroes, a Wikia wiki.
Retrieved from "http://vgoplayers.com/wiki/index.php?title=Mordebi_Human&oldid=1405"