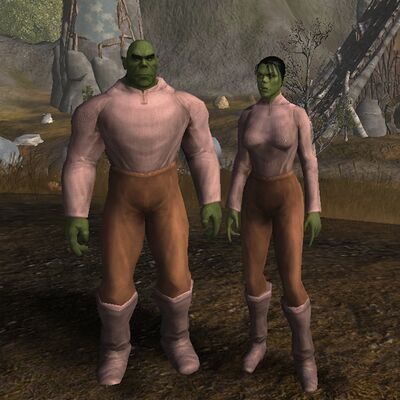 Brutal and destructive, the orcs of the Kojan Archipelago are terrors of the seas. These seafaring raiders, and their goblin cousins, would pose a major threat to the whole of Telon if not for the animosity between their clans keeping them in check. The orcs, and their goblin clansmen, hold a deep spiritual link with their ancestral spirits. Their warseers commune with these spirits to foretell portents of the future and earn favor with Ghalnn, god of slaughter and lord of battle.

The city of Martok is a fortified military stronghold where the Martok clan prepares for constant warfare against their enemy, the Gulgrethor clan. The orcs live simply and efficiently, devoting their free time to training for battle rather than partaking in arts and music like many of the other races.

Orcs are feared or hated by most races across Telon. Their devastating invasion of the continent of Thestra in the not too distant past has earned them powerful enemies. The orcs, however, couldn't care less, for their great size, strength, and toughness makes them at home in battle.

From Vanguard Saga of Heroes, a Wikia wiki.
Retrieved from "http://vgoplayers.com/wiki/index.php?title=Orc&oldid=11674"