The psionicist is a great class for those who like to control the flow of battle. The psionicist has many mind control abilities at their disposal that allow them to direct a mob's attention where the psionicist would like. Besides a traditional mesmerization skill, the psionicist can fool a mob into fighting a cloned illusion of itself, charm a mob to fight another, or cause a mob to increase or decrease its hate of the psionicist's defensive target. Like many other Vanguard classes, the Psionicist can switch between different stances - called concentrations - that focus on different abilities. One such mindset is Phrenic Rage, which focuses on offensive abilities. A Psionicist is also able to bring assorted buffs to a party. For example, a Psionicist may increase an ally's INT & WIS, or enshroud their allies in a barrier of mental energy.

Some stances may not currently be scripted properly
Psionicist stances are called Concentrations for they focus their minds toword a specific task: defense, damage, or utility. Some of their Concentrations can only be learned from Gesalt Stones. 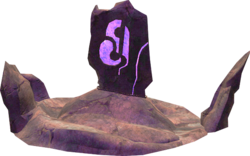 Image of a Gestalt

Unlike some other classes who must fight specific mobs to learn some of their abilities, the Psionicist learns some of their abilities through meditating at gestalt stones scattered throughout the world of Telon. In the lower levels there are several stones for a particular ability so you may not have to travel so far to find them. As you level up gestalts stones become more rare and there may only be a single gestalt stone for an ability, forcing you to go to more and more dangerous locations to reach your fullest potential.