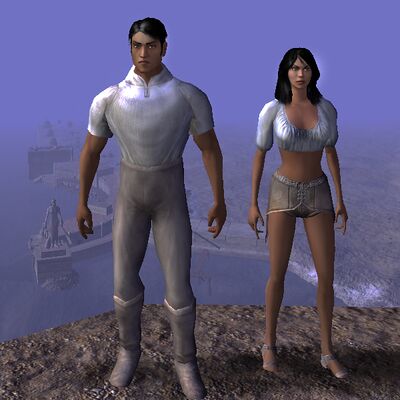 The dominant race on the continent of Qalia, Qaliathari humans enjoy wealth and luxury paralleled by very few other groups on Telon. Though they had to raise themselves up from the harsh sands of the Qarath Desert, they have built many fine monuments to their culture. From the graceful spires of Ahgram to the gargantuan statues that guard the port city of Khal, qaliathari prosperity is easily noted. Their prosperity, unfortunately, has also made them an easy target by a plethora of unsavory groups. Overland trade is being decimated by the Ksaravi Ratmen and the Harami Bandits; many covert groups vie for power in the busy streets of Ahgram; and corruption from within threatens the ranks of city officials. The Qaliathari stand ready to battle these problems, but will they succeed when there are so many troubles threatening the world of Telon? Like most humans, the Qaliathari have a wide array of talents that have lent to their success and widespread population.

Bribes and patronage are common diplomatic tools in Qaliathari run society, and some (particularly some of Khal's Mordebi inhabitants) have blamed the ever-present corruption in Khal and Ahgram on these and other tendencies. Ruled by their Sultan from the palace in Ahgram, the Qaliathari have a sea-trade empire which spans far beyond Qalia's shores, and a navy (including detachments of Wyvern riders) which protects civilized Qalia fairly well.

From Vanguard Saga of Heroes, a Wikia wiki.
Retrieved from "http://vgoplayers.com/wiki/index.php?title=Qaliathari_Human&oldid=1371"