The ranger's awesome displays of combat prowess are a wonder to behold and a nightmare to face. Unique fighting styles allow the ranger to be able to fight defensively or offensivly and improve their tactics by adapting their combat style in reaction to their opponent's powers. Rangers also have some command over nature itself, using it to heal and augment as well as channeling it into special attacks. The ranger is also a very skilled archer, having many special skills when using a bow in combat. The ranger wears medium armor and prefers wielding double one-handed weapons.

The Ranger is an offensive fighter that is skilled in melee and ranged combat. His ties to nature give him many useful skills such as roots, snares, foraging, and animal charming. The Ranger can switch from being a damage dealer to fighting defensively by using his evade and parry abilities. Rangers are fighters who specialize in melee and ranged attacks, and this class is at home in nature. Like animals, rangers have special instincts that give them certain bonuses, and rangers can also tap into healing spells and poison cures. Rangers specialize in both melee and ranged attacks, and have an arsenal of special attacks at their disposal.

Some stances may not currently be scripted properly

Stances observe an opponents actions and increase over time. There are 6 levels to each stance and start at 0 and increase the longer you stay targeted on and engaged on a mob. If you switch offensive targets, the level resets to 0 and starts building again. You can switch Stances on the same mob and not lose the stance "level." Only switching targets resets the level. The 3 stances are:

Similar to Disciple's Endowments, Rangers gain additional hidden spells/buffs through executing abilities in a specific order. To make a combo the moves must be pressed within 8 seconds of each other. It does not matter if the move lands a hit or not.

Some Ranger abilties are not taught by a trainer but instead are learned from fighting specific mobs in the world. 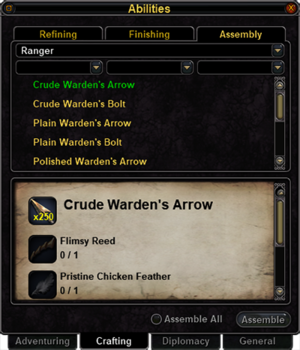 1. Opening your Abilities window (Default is P)
2. Click the Crafting Tab (Bottom)
3. Click the Assembly Tab (Top)
4. Select 'Ranger' from the drop down box
5. Select the arrow recipe from the list at the bottom

Once the ranger obtains the Forage ability, he/she can start to collect the items to make ranger arrows. These arrows can only be used by the ranger class. The arrows have three components: Arrowhead, Shaft, and the Fletching.