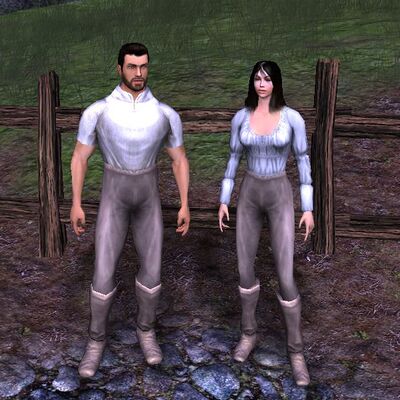 As the dominant race on Thestra, the influence of the humans is felt on all corners of the continent. They lack the size of the Lesser Giants, the life span of the elves or the sturdy resilience of the Dwarves but they make up for it with an overwhelming desire to succeed, a bold tenacity and perhaps most importantly, the ability to adapt. After the invading armies of undead razed their home city of Targonor, the humans moved north and rebuilt, founding the giant fortress city of New Targonor. This bastion of human achievement protects not only the humans but all the races of Thestra. While New Targonor is the pinnacle of human civilization, most are still born in small outlaying farming villages – such as Tursh. A Thestran human's interests vary greatly and due to their versatile nature they often pursue a wider variety of professions than most other races.

From Vanguard Saga of Heroes, a Wikia wiki.
Retrieved from "http://vgoplayers.com/wiki/index.php?title=Thestran_Human&oldid=11649"