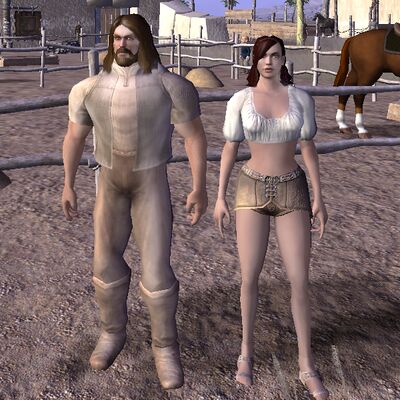 Descendents of the seafaring Varansul, the Varanthari are master riders and infamous raiders. Their traditions of the horse and rider has influenced their culture, with horse lords leading raiders to plunder caravans and villages of the other races. In recent years, the Varanthari have settled down somewhat, but the vast majority still roam for years at a time. Deeply spiritual, many Varanthari claim to receive whispers from the spirits of Telon which are widely considered superstition by other races. Despite this, Varanthari have an unshakable confidence and trust in their own race, to the point of arrogance to other races. A Varanthari is difficult to confuse or awe, and they always seem to have a response for anything Telon may throw at them. Because of this, they live in Lomshir, and ignore the visiting races from other worlds and planes that pass through, such as the Kurashasa.

The Varanthari are horse people, and view the horse as Alurad's finest creation. All Varanthari learn to ride, and all warriors learn to fight from horseback. There are four major Varanthari tribes mentioned, and all players belong to just one, which is the most settled of the four. Another tribe of note are the Mordebi Varanthari, who are infamous bandits and raiders of the Qaliathari and Mordebi settlements, though this could be said to some extent of these three other tribes.

From Vanguard Saga of Heroes, a Wikia wiki.
Retrieved from "http://vgoplayers.com/wiki/index.php?title=Varanthari&oldid=1776"