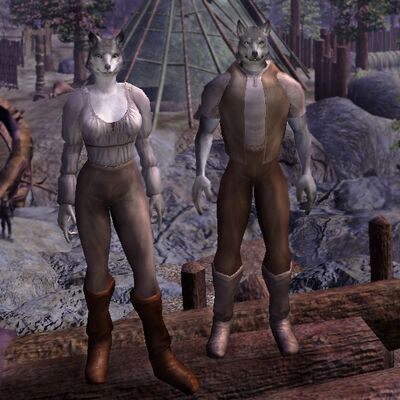 The ferocious and wolf-like Vulmane roamed in packs for thousands of years, constantly warring among themselves and engaging in skirmishes with the elves. It is only recently that the undead menace and the threat of being wiped out has forced them to create a more permanent settlement and to change their warlike ways. They live in the primitive and tribal village of Dahknarg, where they are lead by a clan chief. At the moment, they are entered in a tentative alliance with the other races of Thestra though at times tensions, especially with the elves, still run high. However, despite their beastly appearance and tribal ways the Vulmane are a noble race. Honor, respect, strength and loyalty are valued in Vulmane society. They are master woodsmen, fearsome warriors and once you have earned their trust and respect – valuable allies.

From Vanguard Saga of Heroes, a Wikia wiki.
Retrieved from "http://vgoplayers.com/wiki/index.php?title=Vulmane&oldid=1765"