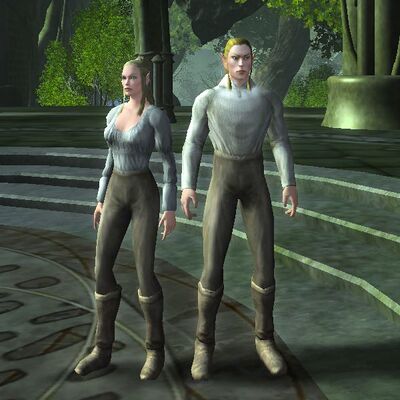 Noble, beautiful, haughty and arrogant, for thousands of years the majestic elves defined Thestran civilization. Though after the great breaking nearly a thousand years ago, they were hurt perhaps the most of all the races. With their cities destroyed and much of their population gone the elves of Thestra were crippled. The ensuring wars have made the rebuilding process slow and it is only now that the high elves are rediscovering the knowledge that had been so long ago lost. A typical High Elf is of a slender build, they are pale and slightly taller than humans. They prefer to keep to themselves but realize that alone, they cannot hope to defeat the invading armies of undead and thus have made an effort to ally themselves with the rest of the Thestran races, putting aside even their legendary hatred of the wolf-like Vulmane. They make their home in the forest city of Leth Nurae. Without walls, it would seem a susceptible target to attacks but few have had the courage to try.

From Vanguard Saga of Heroes, a Wikia wiki.
Retrieved from "http://vgoplayers.com/wiki/index.php?title=High_Elf&oldid=11681"